I'm a planner at heart. I truly believe if I plan ahead, life will flow more smoothly. I have a little thing about control (I'm a Virgo so it comes naturally) and planning helps me feel like I have more of it. For years, I planned our weekly family meals by pulling ideas and recipes from magazines, cookbooks, family recipes and the like. I'd sit down with my latest Everyday Food, or my ever-growing basket of torn out and hand-scribbled recipes, and pick a few that called to me. I'd go shopping and be done with it. 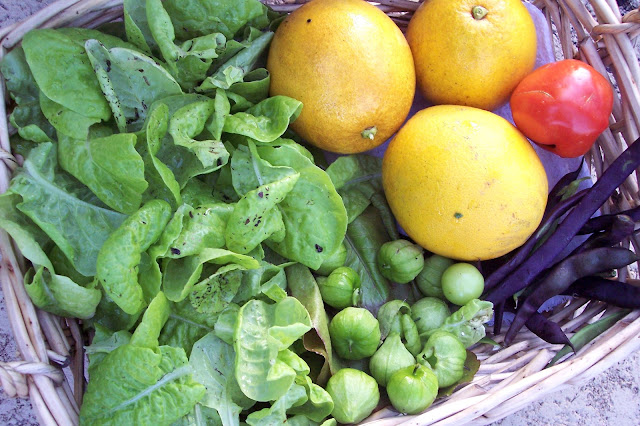 But now, I have this garden and it's producing food. Good, fresh, enough-to-actually-eat food. And over the past several months, I've noticed my menu planning has changed. I haven't pulled out that recipe basket in some time. I let my food magazine subscriptions expire. Instead, meals are being planned around what's ready to harvest. 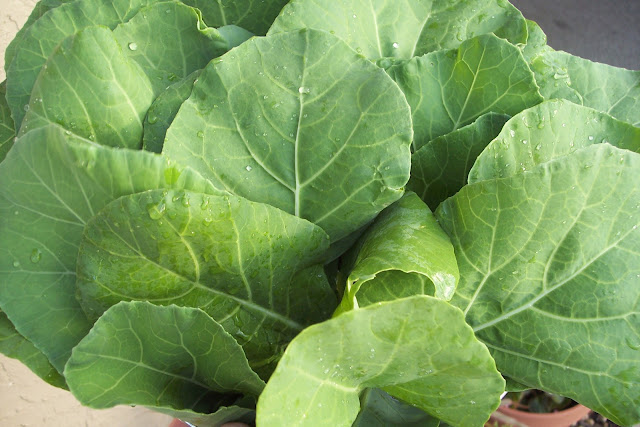 A few bunches of collards leads to BBQ pulled pork, cornbread and southern-style greens. Locally grown corn and strawberries may round out the meal, depending on what's at the market. (My own corn is in the ground and coming along... but that's a whole other post.)  A large tomato harvest may end up as a refreshing gazpacho, accompanied by a quiche made with backyard eggs garnered at my local food swap.﻿﻿
Speaking of the food swap, it too has become a driving force in my menu planning. After this month's swap I made a simple Vietnamese pho (noodle soup) using items I had on hand like rice noodles, chicken broth, and leftover roasted chicken, as well as fresh Thai basil and cilantro from the swap. I popped in a few candied local jalapenos, also swapped for, and we had a restaurant-worthy bowl of soup. 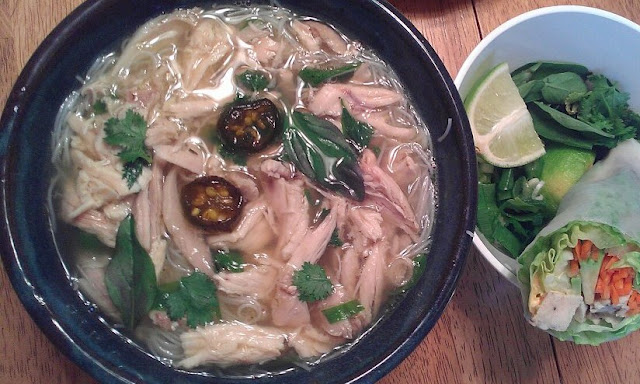 And so this is how it goes now... I see what's growing in my backyard and get some ideas. Then I go to the market and see what other local, seasonal produce is available. And somehow, a meal plan comes together. I go home and season organic chicken breasts with Moroccan preserved homegrown lemons and garden-fresh herbs, to be baked and served with oven roasted, locally-grown zucchini and homegrown tomatoes, all finished with a seasoned salt mix from... yes, the food swap. We're eating eating more locally, mindfully, seasonally, and nutritiously than ever before. And in the process... I've learned to release a little bit of control, replacing it with a lot more creativity in the kitchen. This is so good for everyone.

Cook rice noodles until just done. Rinse and drain. Divide desired amount between two bowls. (Save remaining noodles to toss in peanut sauce tomorrow!) In a medium saucepan, combine all other ingredients and bring to a simmer. Let cook for approximately 10 minutes so broth becomes infused with ginger and spices. Remove lemongrass, ginger and spices from broth. Add chicken and cook until heated through. Ladle soup into bowls of noodles. Sprinkle each bowl with a little fish sauce and a squeeze of fresh lime juice. Top with jalaepnos, scallions, Thai basil and cilantro.

Ah yes. I hit that place a little bit ago, too. I was so used to making a solid meal plan and going to the store and buying what was on the list--no matter what. Now I can go and pick up what's beautiful and on sale, and I know we'll have plenty to eat. It's liberating!