"How Did I Get Here?" and Pickled Baby Leeks 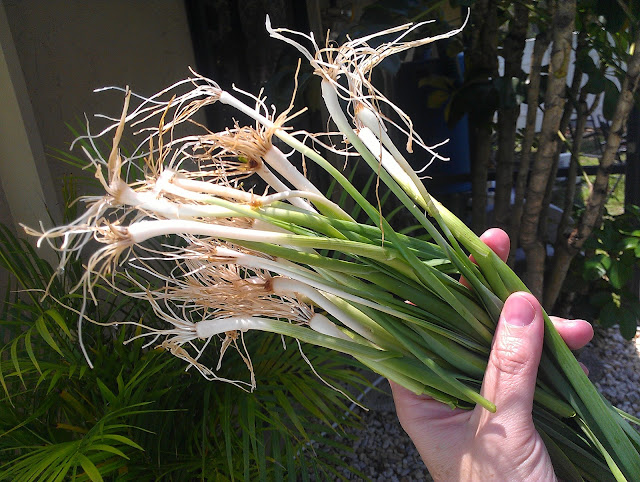 So, this morning I found myself in my backyard garden wearing only a wet bra and a towel, turning compost in the blazing heat. After a moment, upon hearing a close-by neighbor's voice, it dawned on me that, uh... I'm in my underwear, um... in my backyard... ahem...holding a shovel and standing over a pile of composted, well...garbage. How did I get here?!

It started with those famous words: "I'm just gonna run out to the garden to snip [insert random vegetable/herb/flower here]." Today, it was collards that had to be harvested. And they really did; I cut off the last salvageable leaves and then pulled up the spent plants. While I was out there, I realized it is July. And it is HOT. And I am a fool to believe I will keep producing food through a Florida summer of heat, humidity, bugs and weeds. So I harvested most anything left: a handful of leeks started too late (so small, I'll call them baby leeks), a few tiny onion bulbs and some hot peppers. I cut some herbs to try and root... and some thyme blossoms to research if I can eat them. I yanked up some non-producing tomato and pepper plants... you get the picture.

After my frenzy of dismembering the garden, I was spent and drenched in sweat. So, still wearing workout clothes from a morning tennis match, I stripped down to my undies on my back porch and quickly jumped in the pool. Ah, sweet relief!

Revived, I wrapped myself in a towel and headed into the kitchen to rinse off my harvest. Herbs into jars of water, leeks rinsed and cleaned, collards washed... towel around my waist now, in the privacy of my kitchen. I took a handful of discarded leaves out to the worm bin on the back porch and was greeted with a huge plant growing up from out of it with a massive root system taking over the whole bin. After picking through roots and worms and vermicompost all compressed together, I discovered a corn cob was the source (a discard from my failed corn growing experiment). Well, I thought, I'd better get this out of here into the bigger compost bin out back...

But last weekend, I'd dumped all my pretty-much-finished compost into an empty raised bed where I can better turn it and finish it off. So there I was, in the middle of my backyard, wet, in my underwear & towel, holding a wildly-sprouted corn cob in one hand and a shovel in the other. And that, my friends, is why you should never judge that "crazy lady next door" ... she might just be a fledgling homesteader!

Here's what I did with those baby leeks, onions, and hot peppers... 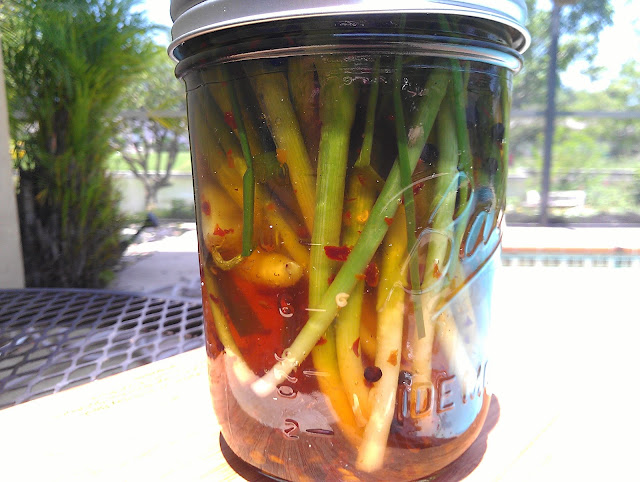 Trim the roots from the ends of the leeks. Cut the dark green ends, keeping them as close to the same length as possible. Pack the ramps or leeks in a clean canning jar, or jar with a tight fitting lid. Combine the vinegar, sugar and seasonings in a small saucepan and bring to a boil, stirring to dissolve the sugar. Pour the hot vinegar mixture over the leeks and let cool. Refrigerate for at least 24 hours, or up to several weeks.

HA ha ha...
xxoo
Yipee for pool, compost, and being the crazy lady next door.