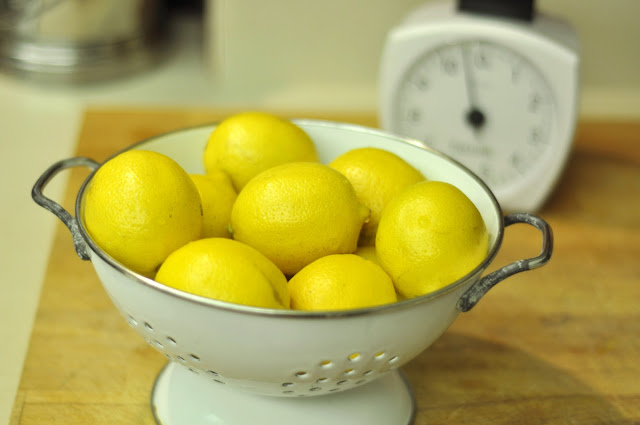 It's lemon season! My magic lemon tree produced so poorly this year, yielding only a handful of usable fruits. But I simply couldn't let the season pass without putting up some preserved lemons. Have you tasted these? They are so very delicious, and so easy to make! Preserved lemons are simply lemons pickled in their own juices and salt, plus a few spices that perfectly compliment the season. 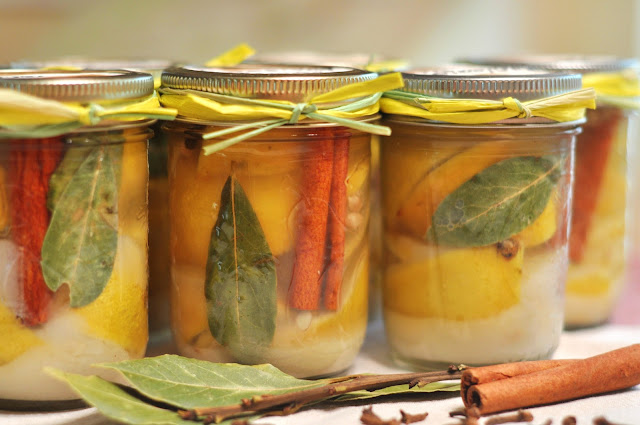 Grab a dozen Florida lemons from your market (like I did), or from a local tree if available, and preserve them before the season is gone! The pickled rinds add an exotic, lemony flavor to all types of dishes, year round (see my favorite ways to use them below).

Makes 6 half-pint jars.
12-16 homegrown or Florida lemons
Extra fresh squeezed lemon juice, if necessary
1 1/2-2 cups fine sea salt, more if needed
Cloves (3 per jar)
Cinnamon sticks (1 per jar)
Bay leaves (1-2 per jar)
Sterilize six half-pint jars by placing in water to cover and boiling for 10 minutes. Place jar lids in a small saucepan, cover with water, and bring to a boil. Turn off heat and keep in hot water.
Clean the lemons thoroughly to remove any dirt, then chop into quarters, lengthwise. Cover the bottom of a jar with one tablespoon salt and top with four lemon quarters, pressing them down as you pack them in to release as much juice as possible. Cover lemon slices with another tablespoon of salt. Repeat until the jar is full, finishing with a final tablespoon of salt. Make sure the top is covered with lemon juice (add more fresh squeezed juice if needed) before sealing the jar. Tuck cinnamon stick, bay leaves, and cloves into the sides of the jar as you go. Seal the jar and store at room temperature for at least four weeks, shaking occasionally to distribute salt.
Once opened, store the jar in the refrigerator for up to six months. To use, take a lemon from the jar and rinse it well to remove the salt. Discard seeds and pulp (if desired). 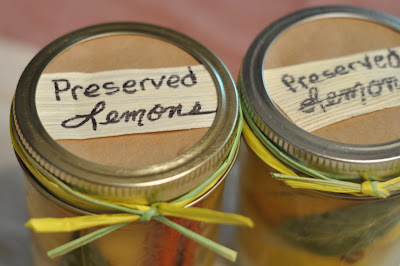 - Use in place of lemon zest or lemon juice in recipes.
-  Mince finely and add to couscous or yogurt.
- Use in a homemade vinaigrette.
- Mince with herbs and add to homemade butter.
- Chop and add to soups & stews.
- Mince and cook with butter & wine to make a lemony beurre-blanc sauce for fish
- Chop and mix with olive oil & herbs to rub on chicken before roasting
- Slice and add to sautéed greens like kale, spinach, and chard.

You're not using these for the swap are you?! Because if you are, I MUST have one! Maybe we could work a little private swap? :)

Thanks for the inspiration! I'm trying a batch of spicy preserved lemons. Substituting peppercorns and red pepper flakes for the clove and cinnamon. We'll see how it goes!

Liquid Pen - I can't wait to hear about those! Maybe we can trade a jar.

Oh, thank you so much for this lovely post!
I am going to make some this week, sounds delicious, warm greetings from Holland, xx sas